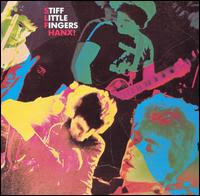 Here's a vinyl rip of another essential album of its era. 5 of these songs were singles.
Recorded live in July 1980 (Johnny Was at the Rainbow, all other tracks at Aylesbury) this LP was initially intended as a USA only release prior to the bands' US tour.
I was very small as a kid- and when I was 13 SLF played in Llanelli.Unbelievable! Hardly anyone ever played in Llanelli. It was over 18's and I looked about 8. I was spared the ignominy of being refused entry ( I would have seen fuck all anyway) by not having the balls to defy my old man (what an anarchist I was!). So whilst one of my favourite groups played 5 miles from my house I was playing cricket in the park, or something like that...
In the interest of continuity I haven't split the tracks up.
Jake Burns – vocals, guitar
Jim Reilly – drums
Henry Cluney – guitar
Ali McMordie – bass