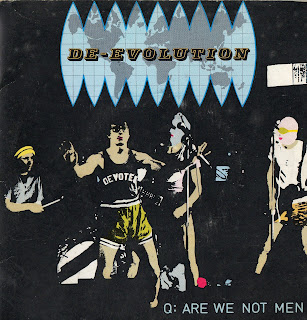 This was DEVO’s debut single. It was produced by Brian Eno, although such luminaries as Iggy Pop, Robert Fripp and David Bowie also expressed an interest in producing them at the time. Allegedly Bowie eventually did help out with the production.
The flip side Jocko Homo is titled in reference to a creationist tract called Jocko-Homo Heavenbound by B. H. Shadduck . The song also makes reference to the Charles Laughton/ Bela Lugosi movie Island of Lost Souls (1933). This also gave the band the phrase ‘are we not men?’ spoken in the movie by Lugosi.
Ripped from 32 year old vinyl- gatefold sleeve pics in file.