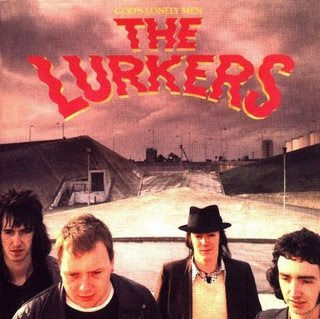 Bouncy pub-punk that owed far more to a band like Eddie and the Hot Rods than to The Clash Vernon Joynson in Up Yours!A Guide to UK Punk, New Wave & Early Post Punk (2001)


Long hair and sideburns alert!
If you were aware of the high standing of the Lurkers in the pantheon of early punk bands or had read that that they were London’s answer to the Ramones (Rock: The Rough Guide, 1996) then you might be somewhat disappointed by this pub rock plodder.
Lyrically it’s around the form six mark, and the music reminds me of the fact that many of the early punk bands, Pistols included, had actually aspired to be pop groups (think Sweet, Bay City Rollers). Still, I’m sure that I’d have been more than happy to see them playing in my local in place of the usual prog rock fayre, but I don't recall ever being tempted to write to the fan club address on the inner sleeve of this, their second LP.