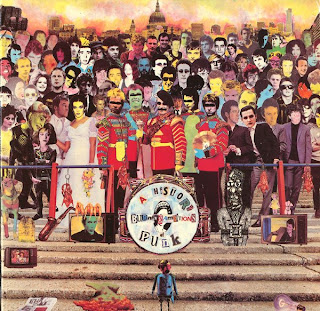 Quality issues- there are plenty of jumps on this one, but I wouldn’t mind having a £1 for every time I’ve played it- and it was constantly in demand from mates as well. Looking back I think that this is the last LP that I ever taped for someone- and that was only in about 2003!
There’s no such thing as a perfect compilation- but this is a great overview of the punk scene from 1976-1983, covering early classics of the genre from the Sniffin' Glue era, moving through more diverse sounds of 77- 78, and on to Oi , hardcore , and darker stuff. Having said that it doesn't fall into the trap of some later compilations of including 'new wave' acts with tenuous links to punk.
Sadly there’s no Pistols, Clash (but Joe is on here), Siouxsie or SLF. There’s no Ramones (but only 4 of the tracks are by non British bands – The Boomtown Rats (?), The Saints, The Heartbreakers and the Dead Kennedys).
So, in place of hi fidelity audio perfection I offer you a genuine crackly, jumpy slice of the punk era.
Imagine its 1984- Thatcher’s in power, we’re all on the dole- your listening to it on a crappy record player in a gloomy council house bedroom- you can supply your own cider- and see who you can spot on the Sgt Pepper style cover… 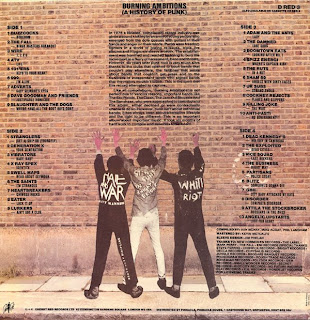