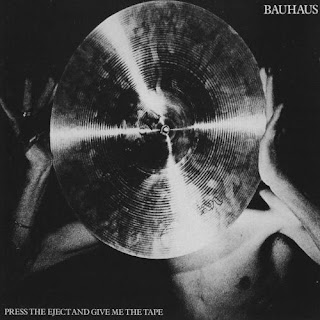 It must be pretty frustrating downloading these vinyl rips from Burning Aquarium- some of the discs I rip surprise me with the enduring quality (I mean lack of scratches and surface noise) and then occasionally there are others like this! This vinyl has obviously taken a battering over the years- there are two really nasty bites in the opening track but after that it’s not too bad, so relax. Bauhaus’ music was pretty ictal anyhow, and they even called their best of compilation Crackle.
These recordings captured Bauhaus live in Liverpool and London in the winter of 1981-82.
By the way, it says on the label PLAY VERY LOUD and I’m not going to argue with that.
Again, I’ve not split the tracks up.