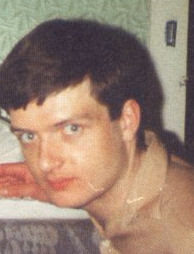 Warsaw took their name from the track Warszawa off David Bowie's Low album.
In January 1978 They changed their name to Joy Division to avoid confusion with metal band Warsaw Pakt

Recorded at Pennine Sound Studios, Manchester, July 18th , 1977, this was intended as a demo, and is noteworthy as being their first recorded work.
The line up contains a couple of transparent aliases- Pete Hookey is of course Peter Hook, and Barney Rubble later reverted to Bernard Sumner. Steve Brotherdale was only with the band briefly before leaving to join an outfit called Panik, who, he felt, had more potential than Warsaw. (Either that or the other band members simply abandoned him at the roadside one night). Steve Morris took over on drums, completing the line up that would be Joy Division and later the backbone of New Order.