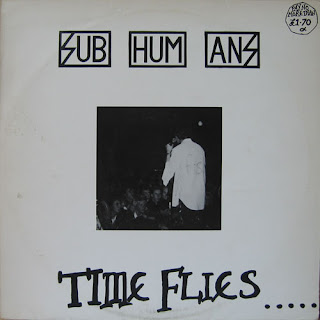 The Subhumans came from Wiltshire and initially signed to Flux of Pink Indians’ Spiderleg label. They cited their influences as being Crass, The Damned, King Crimson and Frank Zappa!
This 8 track EP from 1983 brings us some tuneful, technically accomplished anarchopunk . There’s even a piano driven song! They sound more like a 1977 band than their crusty contemporaries.
line up:
Dick Lucas - vocals,occasional piano
Grant Jackson - bass
Bruce Treasure - guitar,vocals,occasional drums
Trotsky - drums