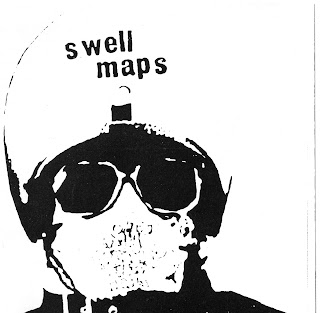 It’s hard to imagine a band more diverse in their influences or output- Swell Maps turned out everything from storming punk songs, ballads, ambient found sound collages, often within the same side of one LP. It was as if they just didn’t know what to do next (in fact their 1981 compilation was titled Whatever Happens Next…) what did happen next was they split up. I read somewhere that the Swell Maps produced a great array of brilliant songs whilst also wasting a lot of tape, and after two bona fide albums and four singles they left behind enough material to fill a further six compilation LPs.
This one does the job- tracks from the 2 studio LPs, singles and a lot of alternate takes and live stuff.
Truly unique and deeply influential.
tracks 4, 6, 8 & 17- recorded Sept 1977.
rest recorded December 1978- July 1979.
Nikki Sudden- guitar, vocals
Richard Earl- guitar, bass, vocals
Epic Soundtracks- drums, piano, stylophone, backing vocal
Jowe Head- bass, violin, backing vocal
David Barrington- guitar, bass, vocals
John Cockrill- guitar, backing vocal