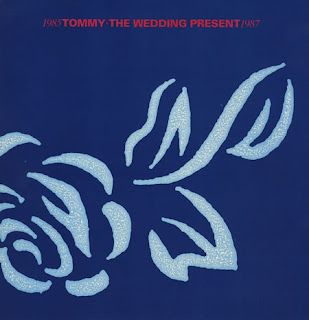 I’ve always thought that The Wedding Present was an inappropriate name for a pop group — more like a poem, or a book or something — and therefore quite attractive (to me!). I’ve also always been fascinated by weddings... David Gedge
I have been unable to locate the origin of the phrase it’s grim up north. At a time when independent music was descending into tweeness the sound of The Weddoes, the scratchy urgency of their songs and the flat anguish of Gedge’s singing, was , well, very real .
Even though describing a pretty hopeless life, their gritty kitchen sink dramas, documenting disappointment and portraying relationships as dour wars of attrition between mutually uncomprehending parties, were a breath of fresh air.
Tommy (1985–1987) released in July 1988 is a compilation of their first four singles, and selected tracks from two early radio sessions. Readers please note: The band originate in Leeds, but I have made no reference to the Gang of Four…
Line up:
David Gedge – vocals, guitar
Peter Solowka – guitar
Keith Gregory – bass
Shaun Charman – drums (tracks2-12)
with: Julian Sowa – drums (track 1)
Mike Stout – guitar (track 8)