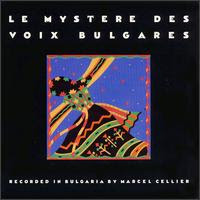 Beauty of perfection! Perfection of beauty! It is between these two exclamations that lies… the mystery of the Bulgarian voices- Marcel Cellier.
Never before have I been so intensely subjugated by the human voice -Ivo Watts-Russell.

The Bulgarian State Radio (later and Television) Female Vocal Choir was formed in 1952, and recorded as early as 1955. Swiss ethnomusicologist Marcel Cellier, who lived in Bulgaria for many years, released an LP of their work, entitled Le Mystere Des Voix Bulgares in 1975, the culmination of fifteen years recording.
When head of 4AD records, Ivo Watts-Russell , was given an unlabelled cassette of this record by the Bauhaus singer Peter Murphy, he was so fascinated that he became determined to bring their sound to a wider audience (see ‘hometaping is killing music’! )
Watts- Russell was able to license the recordings, and the resulting 4AD album proved massively popular.
Lets not get too folksy about this, the actual songs performed might be hundreds of years old, and when at last we got to see the Bulgares they were dressed in traditional costume, but this is no field recording of untutored peasants working in some esoteric tradition, but rather the work of rigorously trained singers of what was effectively the national choir of a Communist state.
Still makes me think, however, of whitewash, pomegranates, and incense. (With apologies to Bulgarian readers).
More info on the choir here.