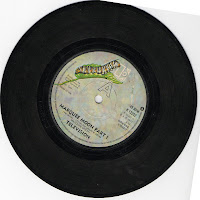 Let’s put this into context- This 7” single is 32 years old.
I found it in a box of rubbish in 1986. I was literally going through somebody’s rubbish when I found it. It was naked- no sleeve.
So there’s a bit of surface noise. That’s an understatement.
There are millions of pristine versions of this music available out there in blogland.
It just made me think though- when you’re looking for a rare record for every copy that’s nestling comfortably in someone’s collection, armoured in a polythene sleeve, protected from dust and extremes of temperature, there are probably an equal number that were chucked out in the rubbish.
It emphasises the essentially ephemeral nature of pop music. I remember one kid who used a box of Elvis 78’s as airgun targets…