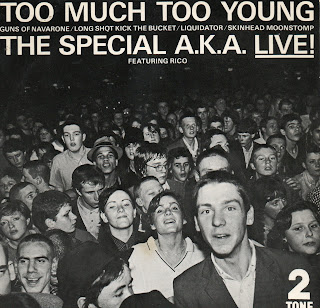 The Specials were the punkiest of the new wave of ska bands, thanks in part to the edgy guitar of Roddy Byers and also the social consciousness of their original songs. Their early records launched my enduring passion for ska and rocksteady, leading me to explore the history of Jamaican music and track down the originals that inspired the 2 Tone movement.
2 Tone was commercially successful in a way that punk had never been. In 79-80-81 The Specials / Special AKA scored 7 consecutive top ten hits, including 2 number ones, ...
the music and image had mass appeal, particularly with younger kids. The porkpie hats, the sta pressed, the braces, the dances, the shades- it was all there on a plate and served up by numberless market stalls. This EP went to number one in the UK charts in January 1980. The lead number, a breakneck version of a track off the band's debut LP, was a reworking of Lloyd Charmers' Birth Control . The remaining tracks are covers of 60's Jamaican classics that would pepper generations of ska compilations.
Terry Hall - vocals
Jerry Dammers - keyboards
Lynval Golding - rhythm guitar, vocals
Neville Staple - toasting, backing vocals, percussion
Roddy Byers (Roddy Radiation) - lead guitar
Horace Panter (Sir Horace Gentleman)- bass guitar
John Bradbury (Brad) - drums
with
Rico Rodriguez - trombone
Dick Cuthell - flugel horn