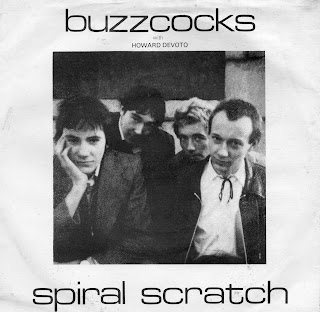 Today, so many years later, the shock of punk is that every good record can still sound like the greatest thing you've ever heard.....because it can convince you that you never have to hear anything else as long as you live-each record seems to say everything there is to say…Greil Marcus Lipstick Traces 1989
This is the 1979 reissue of Spiral Scratch.
The record was originally released 29 January 1977 on the band's own New Hormones label, making Buzzcocks the first English Punk group to establish an independent record label. Its initial 1,000 copies quickly sold out, and eventual sales reached 16,000 via mail order, and Virgin Manchester.
Buzzcocks recorded the tracks on 28 December 1976 at Indigo Sound, Manchester on 16-track tape, produced by Martin Hannett (credited as Martin Zero). According to Devoto: It took three hours [to record the tracks], with another two for mixing…The band borrowed £500 from their friends and families to pay for the production and manufacture of the record.
The reissue was credited to "Buzzcocks with Howard Devoto"
Howard Devoto: vocal
Pete Shelley: guitar
Steve Diggle: bass
John Maher: drums