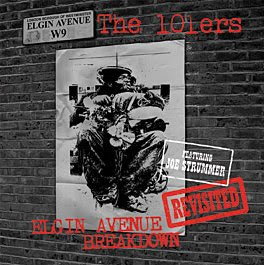 Before the Clash, rich- kid and serial art school dropout John Mellor was in a pub rock band . He was known as Woody then, not in homage to the legendary Woody Guthrie, but rather, it seems, because of his resemblance to Woody Woodpecker… Despite the Orwellian overtones, the band actually took their name from the address of their ‘squat’, 101 Walterton Road, (try looking it up on Google earth).
The 101'ers were supported by the Sex Pistols at the Nashville Room on 3 April 1976, 5 seconds into the Pistols' first song, I knew we were like yesterday's paper, we were over... said John, who was by this time known as Joe Strummer... he went on of course, to front the greatest band in the history of rock music and to take on the mantle of Punk Rock Warlord.
Burning Aquarium is not an encyclopedia.
This is a 2005 compilation of 101ers recordings from November 1975- April 1976.
Joe Strummer - vocals, guitar
Clive Timperley - guitar, vocals
Dan Kelleher - bass, vocals, keyboards
John Mole - bass
Richard Dudanski - drums, vocals
Posted by Walker