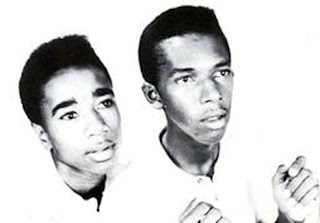 Still no heatwave, but I'm going to stick with the reggae theme for a day or two...
Keith & Tex were a Jamaican rocksteady duo who recorded for Dereck Harriott in the late 1960's (they were teens at the time).
These two songs have enjoyed longevity thanks to various versions:
Tonight formed the basis for Augustus Pablo's Bedroom Mazurka (Pablo and Fay) in its various forms, and was also covered by Shabba Ranks.
Stop That Train was the basis for Scotty's Draw Your Brakes (featured in the movie The Harder They Come ) and a version by Clint Eastwood & General Saint in the 1980's.
Keith later recorded for Lee Perry under his full name, Keith Rowe. I don't know what became of Texas Dixon...