My Grandfather was a coal miner- I can hardly begin to imagine how hard his working life must have been- he was the actual 'hewer' who hacked the coal from the seam, lying or crouching in a tiny space, twisting and contorting himself to shovel it back to where his mate could load the tram . Orwell described these working conditions in The Road To Wigan Pier...
Starting work underground at the age of 13 and having survived a disaster (which killed ten of his comrades) at the age of 18, he worked double shifts through the war, which was about the time when he found that 25 years at the coal face had wrecked his lungs. He brought up four children in a three up two down with no inside water, and when they were grown he adopted another. He died at the age of 63, which was considered a tidy old age for a collier.
My Grandfather's working life (1918-c 1945) coincided with times of real hardship, the 1921 lockout, the General Strike of 1926… in the 1920's malnutrition affected a total of one million men, women and children in mining communities, and in 1931 unemployment levels in these areas reached 40%.
In Britain miners were miners were placed eighty-first in the wages league table, often earning about half of what workers in other industries did, and the country’s most valuable raw material was wasted as a result of the mismanagement of the industry by representatives of private enterprise whose sole concern was profit, consequently they did not invest in organization, technology or the welfare of the workforce. At the outbreak of the war Britain’s coal industry was the least efficient in Europe.

I wonder if my Grandfather ever saw this copy of Time magazine? 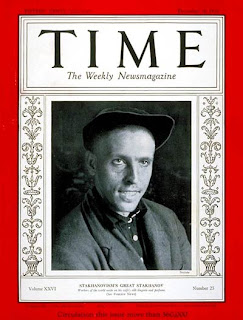 I wonder if he knew that in the Soviet Union they made heroes of coal miners, awarded them medals, put them on postage stamps, made movies about them...
Towards the end of his mining days he would have seen the foundation of the NUM and the Nationalization of the coal industry
The days of the great industries and the great industrial unions are gone, and nobody in their right mind would be nostalgic about the lot of a coal miner in the period 1919-1945, but we shouldn't forget that this was an era of great achievement in terms of welfare, health and educational facilities being established by the working people for the working people. Through solidarity in industrial action they secured shorter working hours and minimum wages. Miners Institutes and Welfare Halls provided indispensible social and cultural facilities, funded by donations from wages of the workers. In the face of such hardship as only capitalism can create, these communities built their own brand of socialism under the noses of their masters.
Posted by Walker