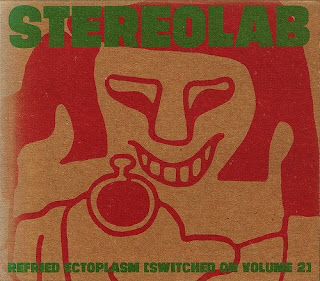 It's time to welcome a new term to your modern music vocabulary: post rock. The expression (it's been knocking around for a few years in scenester circles, natch) is used to describe music that travels beyond the three-minute song boundaries of guitar rock and ventures into a virtual Alice in Wonderland world of experimental sounds. Post rockers aren't afraid of samples, 20-minute dub-jazz excursions, heavily ironic easy listening produced on vintage keyboards (hello Stereolab)...
Angela Lewis, The Independent (19-04-1996)

When I was doing the homework for this post (I don’t carry all this shit around in my head, only most of it…) I came across this great cartoon strip:

Fell in love with Stereolab’s sound after seeing them in a drunken haze on The Word (was I initially seduced by Lætitia Sadier’s gorgeous accent? probably).

There are some lovely numbers here; some race along against a frenzy of harsh keyboards, some bubble with hazy ambience whilst others meander melodically- like a dreampop take on Franciose Hardy.
(their records) sound more like arid experiments than music born of emotional need.
Barney Hoskyns- Mojo (1996)
With their borrowings from early, obscure Kraftwerk and hip obtuse sources, [Stereolab] sound like a band of rock critics rather than musicians.
Dave Simpson -The Guardian.
I think they were just a bit too clever and aloof for the journos- laddish rock music, faux mod 'britpop' and grunge being the order of the day.