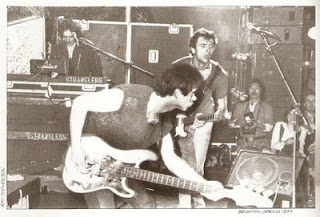 Veterans of the pub scene and tireless giggers, The Stranglers were pulled along in the undertow of punk, delighting (many) punters with their political incorrectness and appetite for disorder. Though unarguably powerful, their music was always complex and melodic.
1977 saw them produce two classic LPs and a succession of memorable singles. This is the first of their two Peel sessions, rather sedate and considered renditions of two tracks from each of the albums.