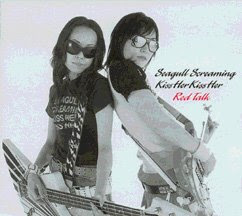 We did some shows, and we didn’t have our band’s name yet. I asked one of my friends, and he chose Seagull Screaming..., this name from the album called The Big Express, from XTC, and everyone liked that name, ‘cause it’s too long...
SSKHKH were formed as a two-girl band in New York City in 1992.
In 1994 Aiha Higurashi returned to Tokyo where she enlisted bassist and vocalist Nao Koyama and drummer Takaharu Karashima.
Red Talk is a 2002 compilation release. Loads of information on this great group here.