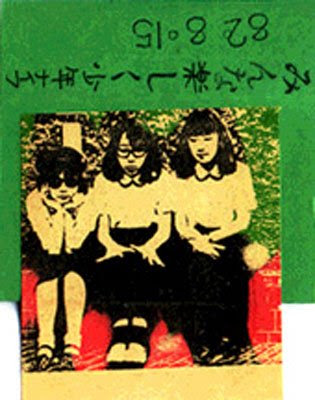 A while back I wrote a piece about the positive aspects of file sharing (see 30th April).
Here’s an example-
Shonen Knife was formed in the December of 1981 in Osaka.
Minna Tanoshiku or Everybody Happy was their first release. It was released in Japan as cassette-format only in 1982. The first 50 copies were released by the band themselves, and the insert features the lip prints of the three members. An additional 20 copies, without the lip prints, were pressed by Zero Records before the band requested that no further copies were made.
The album was never reissued in any format and over the years it became legendary due to its rarity. mp3’s surfaced on a blog in 2007.
So, when this music is made available via blogs, who loses out?
Whilst the few originals and home copies were circulating at huge prices the band weren’t getting a yen. One could argue that having called a halt to the production of the record in ‘82 they effectively ended their commercial ambitions for the recording anyway.
It’s an important document for followers of Shonen Knife, of Japanese music in general and also a great fun record.
Now we can all enjoy it!