When art is removed to a zone of safety, it may still remain very good art indeed, and also very popular art, but its effect on our existence will vanish... Edgar Wind
In his classic work Art & Anarchy, Wind goes on to tell us that there would be no artists in Plato's ideal republic, not because he didn’t respect them; on the contrary, Plato argued that the sacred fear inspired by great art could cause too much excitement and passion and ultimately undermine the entire social system.
I'm not going to mention Banksy here- later perhaps, but let's look at another favourite of mine (you might have guessed- after all, he painted my portrait!) Yoshitomo Nara.
Here is a painting by Nara that was on show at the Marianne Boesky Gallery in New York from 28th February 2009: 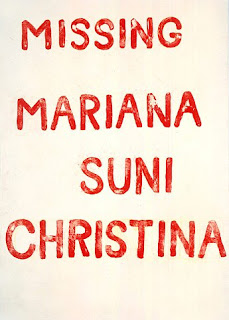 And here is a drawing that Nara made on the steps of Union Square Station, New York, on 27th February 2009. 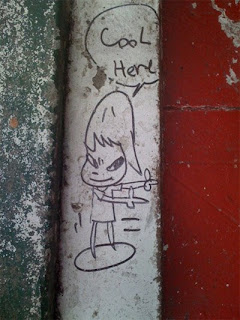 I notice that one of his drawings has a projected price at auction (29.06.09) of £3-5,000 , whereas the charming piece above got him arrested for graffiti and 48 hrs in the cells.
So, what is art in the modern capitalist society? anything at all, as long as you can own it. Aesthetically the 'Cool Here' picture is just as pleasing as anything else that Nara has done, but no one can 'invest' a few thousand dollars in it, take it away and say 'it's mine', so it's not art at all, just graffiti...
Posted by Walker