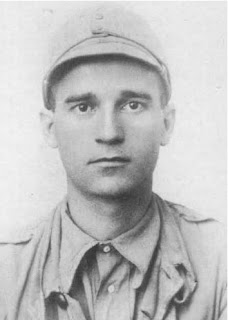 Harry Dobson was a miner at Blaenclydach Colliery in the Rhondda Valley (Wales). A strong trade unionist he was a member of the Miners' Federation and the Communist Party of Great Britain .
Dobson was involved in the campaign against fascism, and following a demonstration against the British Union of Fascists in Tonypandy, he was gaoled.
Concern was growing over the Fascist attacks on the democratically elected government of the Spanish Republic, and in September 1936 the Comintern began organising the formation of International Brigades. An international recruiting centre was set up in Paris and a training base at Albercete in Spain.
On leaving prison Dobson’s first question was ‘how can I get to Spain?’ He decided to join the British Battalion. Dobson avoided the French-Spanish border by sailing from Marseilles to Barcelona in June 1937. However, the ship on which he was travelling was torpedoed . Some of the men drowned but Dobson was able to reach land and eventually joined up with the International Brigade .
The great Will Paynter, who also fought for the Popular Front government, described Dobson as "quiet and unassuming but a great comrade." In his book Miners Against Fascism (1984), Hywel Francis adds that "Harry Dobson …best combined the qualities of courage under fire, coolness and shrewdness in leadership with a profound political understanding."

Dobson took part in the fighting at Brunete, Belchite, Teruel, Huesca ,Gandesa and Ebro. He became a Political Commissar of the Major Attlee Company.

Of the fighting at Ebro Morris Davies later recalled: "I was given orders to capture a ridge. As I advanced with six other men we were peppered with enemy fire. We would not have achieved our objective had not Harry Dobson of the Rhondda given us cover-fire. Harry and I were caught by shrapnel. He insisted that his wound was not as bad as mine and... that I should be taken back on a stretcher first".
Harry Dobson died of his wounds on 28th July 1938.
The governments of Europe refused to act in support of democracy and the Spanish Republic was crushed by the fascist alliance.
Posted by Walker