For three years I lived the life of a girl. It was most dull… 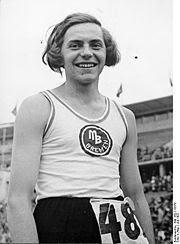 This recent debate regarding Caster Semenya and indeterminate gender in sport reminded me of more innocent times.
When Nazi Germany, which we are told had more than its proportionate share of mad professors and evil doctors, became despairing of their chances of winning any medals at their showcase Olympic Games in 1936 they turned to…
What? Complex hormonal treatments? Performance enhancing drugs? Sinister experimentation that blurred the boundaries of gender?
Er, no. They got a guy to grow his hair long, wear tight pants under his shorts and enter the women’s high jump.
Dora Ratjen, who had a distinctive deep voice, wouldn’t change with the other girls and used a private bathroom instead of the communal showers.
Dora finished fourth in the high jump. Gretel Bergmann, who equaled a national record in the high jump a month before the games, was excluded from the German team because she was Jewish
Ratjen’s detection as an impostor was not the result of any complex laboratory tests, but the presence of five o clock shadow. In 1938 Ratjen was barred from further competition. He never competed in athletic events again.
In 1957, Ratjen came forward and said "she" was actually male (named Hermann Ratjen) and was forced by the Nazis to disguise himself as a woman for the sake of the honour and glory of Germany. For three years I lived the life of a girl, he said, It was most dull…
Posted by Walker