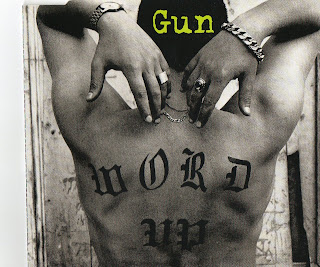 Scottish rockers Gun scored a hit with this thumping cover of Cameo’s 1986 number.
It belted out of pub jukeboxes across the land.
The faceless rock of the other tracks on this CD EP illustrate why they soon returned to relative obscurity.
I've had this knocking about for a while now, having picked it up for 50p in a charity shop, but it never felt like the right time to post it. Funny that, somedays I look at my stuff and think 'I'll post that one, and that one, and that one...' and I build up about a week's worth of posts. Other days the same stack of records and CD's yield no ideas at all. I suppose it's an extension of that dreadful feeling that you get when you look at a wall full of discs and can't for the life of you think of anything that you really want to play.
So, I saved it for a time when I had nothing else to post. Which is now.