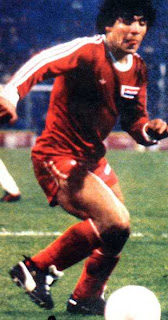 Wouldn’t it be great if football clubs had kept their original names? In the Premier League we would be watching the likes of Dial Square (Arsenal), Newton Heath (Manchester Utd) and St Domingo (Everton). But when I was reading up on South American football the other day I came across one that really takes the biscuit. 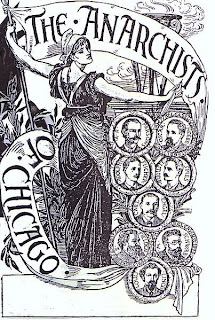 Argentinos Juniors are a bread and butter team from the suburbs of Buenos Aires. Known as The Nursery (El Semillero) they have nurtured many talented players who have gone on to greater things, most notably Diego Maradona, Daniel Batista and Riquelme.
As their other nickname, Bichos Colorados (Red Bugs) suggests, they play in red, inspired by the club's socialist beginnings (now we are getting there).
In August 1904 a group of young men from the La Paternal Barrio , inspired by socialism and the movement to promote May the first as an international workers’ day, founded a football club, which they called Mártires de Chicago (the Martyrs of Chicago), in homage to the eight anarchists imprisoned or hanged after the 1886 Haymarket Riot in Chicago.
Yes, that’s right. A group of young Buenos Aires guys named their football club in honour of a group of American anarchists.
Sadly the name change came early on in their history, and there seems to be little evidence these days of any reverence for the likes of August Spies, Albert Parsons et al at the Estadio Diego Armando Maradona.
Posted by Walker