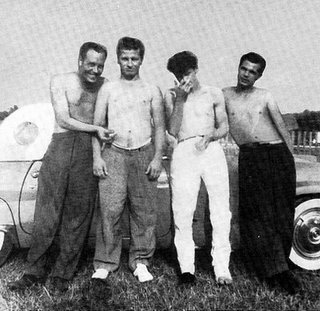 On the road in 1957- Paul Burlison , Johnny Burnette, Gene Vincent, Johnny Black
Rockabilly was a wild, hepped-up meeting between country & western music and early rhythm & blues. It was one of the very first forms of rock & roll, and it was the first one performed predominantly by white musicians (almost all of whom came from the South). Rockabilly was played with spare instrumentation: a twangy electric guitar and an acoustic stand-up bass whose strings were snapped percussively in a technique dubbed "slap-back" (which sometimes made drums unnecessary). Rockabilly had a thumping, jumping beat that easily made it the most propulsive, visceral, and implicitly sexual style of "white" American music up to that point. Essentially, it made rock n roll accessible to white audiences, thus touching off a cultural revolution the effects of which are still being felt. The genesis of rockabilly dates back to the early '50s, when Bill Haley started fusing electrified country boogie with jump blues. But the style truly crystallized on Elvis Presley's 1954-56 recordings for the Sun label, which captured the manic, primal energy that would become a rockabilly staple. They also established rockabilly's signature production style: echoed vocals, loads of reverb, and a warm, crisp ambience that became the Sun label's trademark. Haley's "Rock Around the Clock" broke rockabilly into the big time in 1955, making it possible for Sun owner Sam Phillips to sell Presley's contract to RCA for a substantial sum of money. Presley became a superstar in 1956, touching off a tidal wave of copycat recordings that, while low on budget and innovation, still inspire rockabilly fanatics with their crazed DIY enthusiasm; additionally, many straight country singers began making rockabilly records, some for the style's popularity, others for its wild excitement. Meanwhile, Phillips used his Presley dollars to gather a stable of rockabilly artists that was second to none: Carl Perkins, Jerry Lee Lewis (who broke from the rockabilly norm by playing piano), Roy Orbison, and singers like Johnny Cash and Charlie Rich who were really country artists at heart. Other significant rockabilly artists were Buddy Holly, who brought melodic pop sensibilities to the music; Gene Vincent, whose crack band featured rockabilly's fastest lead guitarist in Cliff Gallup; Eddie Cochran, whose wry stories of teenage rebellion were overshadowed by his untimely death; and Johnny Burnette, who waxed some of the wildest rockabilly sides ever before finding greater acceptance as a pop idol. As rock & roll evolved into a slicker commercial enterprise, and as the music itself mutated (very quickly) into new forms, rockabilly was left in the dust, largely disappearing from the charts after 1958.
Lifted from All Music
Posted by Walker