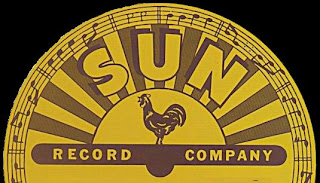 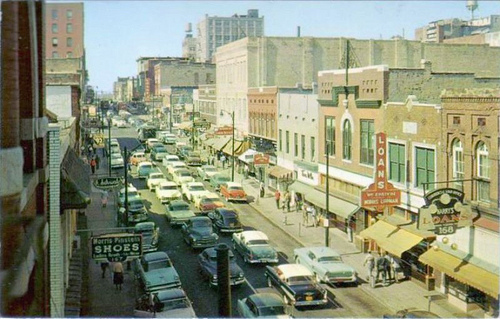 Dewey Phillips of  WHBQ- listeners sometimes mistook him for an African American.  A white DJ who played black music. The first DJ to play an Elvis record on the radio and the first person to interview Elvis.


Elvis' friend and bodyguard Jerry Schilling:
We can never forget that rock and roll was born out of segregation. It was dangerous for us to go down to Beale Street to buy our records. Our parents would have grounded us forever if they found out. It was a totally segregated society. Beale Street was black. Main Street was white. In the middle of all of that, Dewey Phillips played a record called 'That's All Right Mama' by a boy from Humes High School. He had to say Humes High School, because the audience would then know that he was white. Dewey played predominately black music. When 'That's All Right Mama' came on the radio, it was so exciting. It rolled it into something to be a part of. 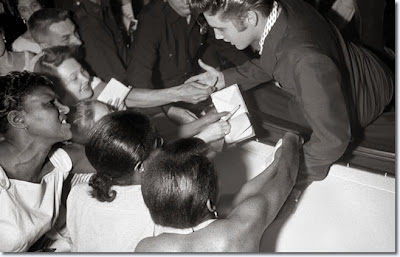 'Down in Tupelo, Mississippi', Elvis told a white reporter for 'The Charlotte Observer' in 1956, he used to listen to Arthur Crudup, the blues singer who originated That's All Right, Elvis' first record. Crudup, he said, used to 'bang his box the way I do now, and I said if I ever got to the place where I could feel all old Arthur felt, I'd be a music man like nobody ever saw'. It was statements like these that caused Elvis to be seen as something of a hero in the black community;in those early years. In Memphis the two African-American newspapers'The Memphis World' and 'The Tri-State Defender', hailed him as a race man- not just for his music but also for his indifference to the usual social distinctions.
In June 1956, 'The Memphis World' newspaper reported, 'the rock 'n' roll phenomenon cracked Memphis's segregation laws by attending the Memphis Fairgrounds amusement park 'during what is designated as 'colored night'.Elvis also attended the otherwise  segregated WDIA black radio station's annual fund-raiser for 'needy Negro children' at Memphis' Ellis Auditorium.

From a transcript of The Biography of America.

You've got to understand, Memphis is an interesting place. It's a convergent point really for two immigration movements. The immigration of whites, of Scotch-Irish and Irish descent through the Appalachian Mountains
We often call their music hillbilly music, okay? Rockabilly they often called it. At the same time lots of these people were living in Memphis.
And just below Memphis, all the way down from Memphis to Vicksburg, is a place called the Delta, the great cotton planting region of the South at the time of the Civil War. And Memphis is a cotton-exporting center. And there's a lot of poverty in the Delta, but there's rich music coming out of the Delta. Howling Wolf, and all the early greats like B.B. King, blues singers are coming out of there.And they're migrating to a place called Beale Street, which is almost an all-black entertainment section in Memphis. And Beale Street fascinates Elvis. And he and his friends started to go down there along with another -- a couple of other white rebel kids. And then more and more of these kids started to go there.
And the interesting thing is that a lot of the black clubs wouldn't let white kids in. They started to let them in, but they roped them off into a separate section. Then all of a sudden, the music gets going, the rope goes down and everybody's out there dancing.
And that's taboo. This is the solid south, the segregationist south. And Memphis is a bastion of segregation. So this is a strange city for a revolution like this to take place.

And a revolution it was, because people like Elvis were not only playing black music; but when Elvis hit it, and he hit it because he got hooked up with a guy named Sam Phillips. And Sam Phillips was an interesting kind of entrepreneur. He wasn't a social revolutionary; he was out to make a little money. He was a record producer with Sun Records.
And he used to say to himself, "What I need, if I really want to make a lot of money in this section of the country is, I need a white kid that can sing like a black guy." And Elvis happened to stumble into his studio one day and cut a record, That's All Right Mama. And Phillips said, "There's the guy, there's the guy." And Elvis simply took off after that. And people are listening to his music. But get this, they're white kids listening to his music, and the white kids are picking up also on the black music... 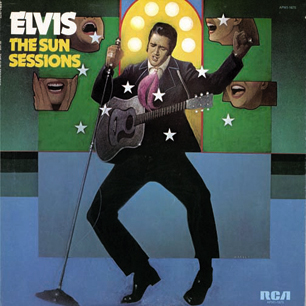 Elvis at Sun, the 1976 release of Elvis' early recordings (lossless)

Hats off to the sterling work of the original posters...
Posted by Walker