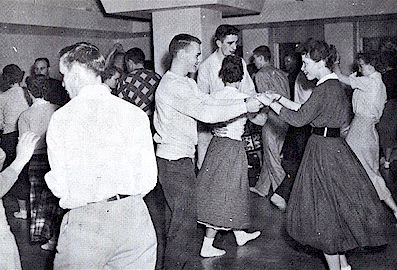 Rockabilly was a marriage of blues and hillbilly styles that caused a ruckus in the country music community as soon as it hit the market.

Coming fast and hard out of the south…rockabilly offered young and restless but still country rooted performers a chance to stretch and cut loose musically in ways never previously imagined. Rockabilly- for a few white-hot, powerful years, widened the scope and gave the younger generation a music all their own.

Rockabilly ignited at the point where country & western merged with blues and R&B.

Given the intense, raw energy the music produced, the simplicity of it all is astounding. At rockabilly’s core was the rhythm- a strong and steady beat made with just a guitar and a stand up bass played in a slapping style. An electric guitar cut through like a sharp knife, and on top of it all was a hillbilly hepcat singer packing a punkish attitude and an assortment of lurid yelps, hiccups and raspy cries- not to mention swaggering dance moves- that gave the music the threat of danger, that made it sexy.
Taken from: You Can't Catch Me: Rockabilly Busts Through the Door. In Country music: The Rough Guide
Kurt Wolff, Orla Duane - (2000)