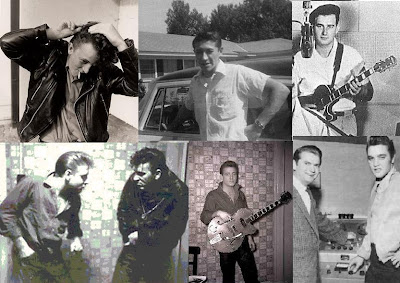 And why not.
By the 1970's, when my real interest in music was developing, the music and culture of the 1950's had already been endowed with a nostalgic  veneer of respectability. When I listened to the Rock n Roll music that they played on the 'golden oldies' features on the radio, it all seemed rather tame. To go with this we had parental tales of naivety and Usaphillia, of better times...
I had a punk mentor who told me about the importance of early Rock n Roll, and at first I couldn't follow his reasoning. He was talking about the directness of bands like  Sex Pistols,  Ramones and The Clash and comparing their impact to that of early Rock n Roll. Of course, it was a long time before I understood what he was driving at. My ears had been subjected to some sort of intertextual prejudice at the hands of DLT, Jimmy Saville and co. The fifties were presented in a pastiche form:  cadillacs, jukeboxes, milkshakes, That'll Be The Day, Happy Days, Grease, pantomime Teds like Mud and Showaddywaddy...
Recently I've been reading a lot about the origins of Rock n Roll, and I found that a great many writers concern themselves with seeking out some Holy Grail- the first Rock n Roll record. They cite Bluesmen like Arthur Crudup or gospel singers like Sister Rosetta Tharpe, saying that such and such disc was the first to contain all the elements of what we consider to be a Rock n Roll song.
Bullshit.
The preshistory of rock music stretches way way back, the elements were always there, check out the Early Influences section in that reliquary of turgid dross The Rock and Roll Hall of Fame; Blues recordings since the wax cylinder, country music in the 1930's. Even the artists who we now accept as being among the founding fathers of Rock n Roll, African American artists such as Little Richard and Lloyd Price,were producing RnB that is indistinguishable from Rock n Roll  years before the term was in use. Take a random sample of  RnB hits from the pre Rock n Roll era, the erstwhile Race Records- surely they're Rock n Roll? (Regarding white artists: Isn't Bill Haley's Rocket 88, released  in 1951- just as much a Rock n Roll number as his later hits?)
Heylin (1992) identified three components of a song: melody, time signature, and chordal progressions. If we look at the proto rock genres, particularly RnB,  the three elements that we associate with Rock n Roll predominate:
Melodically both Blues and Rock N Roll rely heavily on minor pentatonic scales.
They share the 4/4 time signature, a strong backbeat and a swing eighth-note rhythm between beats. Rock n Roll rhythms are also built on the same  I - IV - V chord  progression as Blues.
So the music itself was nothing new.
In terms of fashion, the identity of the subculture most closely assosciated with Rock n Roll in the UK, the
Teddy Boys, was already well established before the term Rock n Roll entered the common idiom.

The most significant statement in the history of Rock n Roll?
If I could find a white man who had the Negro sound and the Negro feel, I could make a billion dollars- Sam Phillips
It had to come out into the open. The musical elements were always there. But a white man had to make the records in order for them to sell, in order for them to be given airtime. Rockabilly was essentially made by whites for whites.

Anyway, I've decided against going off along the path of rockabilly scholarship, and I haven't got the brains or the inclination to analyse the racial discrimination that shaped American society in the 1950's, so over the next few weeks I'll just be posting a few songs from the early days of Rock n Roll, before the commercial aspect emasculated it and cleaned it up too much. The sort of records my old mate was talking about when he said see, that's punk, really, innit?
Posted by Walker