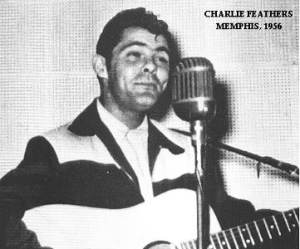 The first ever recorded rockabilly song was in 1949- it was called ‘Tongue Tied Jill’ .There was a store on Chelsea Street that had a recorder in the back room. I cut the song there as a demo...
Now let me tell you where rockabilly comes from. It comes from the cotton patch blues, and from bluegrass.
Charlie Feathers.

Charlie Feathers was from Mississippi. He learned guitar off a friend, a Blues player named Junior Kimbrough. Charlie was a lifelong champion of the Rockabilly sound, and was the master of the much imitated hiccuping and stuttering vocal style.
What we have here is a collection of sides he recorded for the  King label in 1956 and 1957 and a version of his Meteor Records single Tongue Tied Jill , also from '56.


Here's Wedding Gown of White- a country number that Charlie recorded in 1955, with a slide show put together by his daughter Wanda: