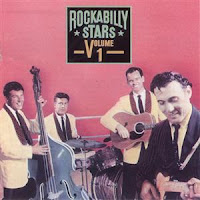 The following is lifted from a review of the 1982 compilation LP Rockabilly Stars, Volume 1:

With hindsight and experience we now can recognise how the foundations of rock n roll were to be found all over the thirties forties and fifties...
Rockabilly, as a musical genre, corresponds emotionally and, for the most part, geographically and temporally to that segment of Elvis’ career that stretched from (That’s Alright Mama) until his induction into the army in 1958.
The early rockabilly artists, raised on a diet of White Country and Hillbilly music, began, at the urging of Elvis’ mentor, Sam Phillips, of Sun Records, to listen to Black Blues and jazz, and affect black vocal styles…
And they made extensive use of the instrument that became literally and metaphorically the voice of a generation- the amplified electric guitar.
Though recorded electric guitar solos date back to the thirties…by the fifties Les Paul had ‘whitened’ and began to popularise the sound. The Rockabillies’ more forthrightly sensual lyrics grafted perfectly onto the guitar sound that was raw, aggressive and devoid of soft sentimentality. It was a sound that established the existence if a generation. Young peoples feelings and fantasies were codified and publicly expressed. The artists spoke for as well as to their audience. And when the slithering, sensuous music was universally condemned, it took on still greater meaning as a challenge to the morals and aesthetics of the older generation.

So am I posting the record? Nope. The curious thing about the album is that it's not really Rockabilly! Throughout there's lashings of fiddles, slide guitar, honky tonk pianos, even saxophones and chorus backing singers.  Generally speaking what we have is a lot of 1950's (ish) country-pop and straight Rock n Roll with all the trimmings. I'm sure loads of Rockabillies in the 80's must have been mightily frustrated on hearing this selection.  Look elsewhere if you want a slice of the authentic music that the review refers to but which is curiously absent from this particular disc.

If you want to check it out for yourselves it's posted here: http://avaxhome.ws/music/rock/rnr_rock_n_roll_roots/rockabilly/va__rockabilly_stars1.html
Posted by Walker