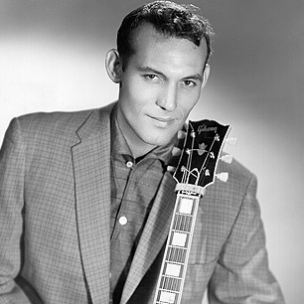 Carl Perkins' background was typical of the early Rockabilly star. From a family of poor Tennessee sharecroppers, Carl first played music on a cigar box guitar. He graduated to a second hand Gene Autry guitar and learned some blues off an African American field worker, John Westbrook, who Carl knew as "Uncle John." Legend has it that Carl re-tied his broken strings, which made sliding impossible, so he would bend to get his blue notes.
Here is the LP 'Best of The Sun Years':