Beautiful, fantastic stuff. You have these blissed-out memories of Betjeman's youth over wah-wah guitar*. It's odd and brilliant - and far more exciting than a lot of the modernist writers who shunned him at the time. There's this comic gravity that I've certainly found inspiring regarding my own work.
Nick Cave


You have these lovely images of somewhere like Hampshire, but you also have this darker undercurrent - and this fantastic music. That was what we were trying to do with Madness: show English life, but say it's not always jolly and, hopefully, have a few good tunes.
Suggs 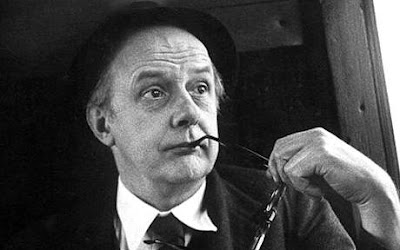 On the albums Sir John read a selection of his poems set to music by
Jim Parker (born 1934), a composer from Hartlepool who went on to win awards for his TV work (Midsomer Murders) and also wrote the 'novelty' hit Captain Beaky.

The instigator of the project was Producer Hugh Murphy, who later worked with Gerry Rafferty and Bonnie Tyler .

They were terribly clever, Sir John said of the studio team when interviewed for The Observer. Hugh Murphy, the producer, has long gold hair and one earring, but he's a wonderful fella. You know, I don't like any of my poems, but I think the music did the trick.


*Sadly Nick is referring to one of the later LPs . The sound became more experimental. As a bonus I've also included the Licorice Fields At Pontefract from Late Flowering Love (1974)- a great chugging guitar track.