Nestor Makhno- My Visit To The Kremlin 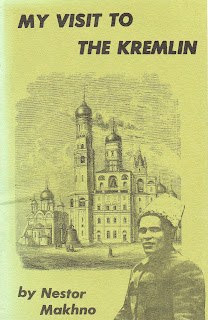 When the Bolsheviks invaded Ukraine in January 1918 they were assisted by the anarchist forces of Nestor Makhno (1888 – 1934). However, In March 1918, the Bolsheviks signed the Treaty of Brest-Litovsk, which as well as ending hostilities with the central powers also ordered the surrender of large amounts of territory (including Ukraine).
In April 1918 a conference of Ukrainian anarchists delegated Makhno to travel to Russia to contact other anarchist groups and determine the Bolsheviks' attitude towards anarchist activity in Ukraine .
Following a harrowing 2 month journey Makhno arrived in Moscow at the beginning of June, and met with leading anarchists and representatives of other political factions. Makhno was impatient with the attitude he encountered in Moscow . He felt that much revolutionary work remained to be done in Ukraine, where the old order still held sway. He wrote of the 'paper revolution' of the Russian intellectuals as opposed to the vigorous anarchist movement he expected to evolve in Ukraine.

In Moscow Makhno was able to meet with two leading Bolsheviks:
Yakov Sverdlov (1885 — 1919), chairman of the All-Russian Central Executive Committee of the Soviets (technically the head of the Soviet state) and General Secretary of the Russian Communist Party.
V.I. Lenin (1870 – 1924), Chairman of the Council of People's Commissars and Leader of the Bolshevik Party.
You can read Makhno's account of these meetings here.

Makhno did not meet Trotsky during his stay in Moscow, as Trotsky was too busy working on the organisation of the Red Army.

The Bolsheviks ensured Makhno's safe return to Ukraine, hoping that he would work as an agent for them, but they were opposed to any form Ukrainian autonomy, and Makhno's activities were deemed counterrevolutionary.
Posted by Walker