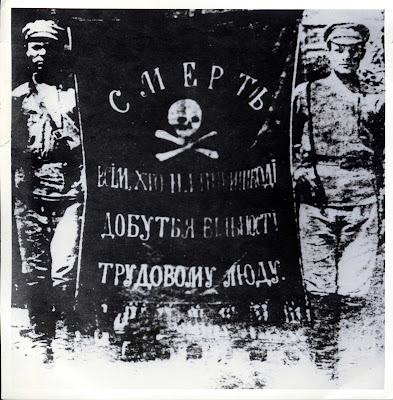 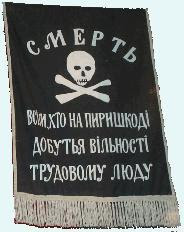 ). Active during the turbulent years 1918-1921, the army consisted largely of peasants and workers and numbered between 15,000 and 110,000.
Discipline was democratically imposed, commanders were elected and recallable and rules were approved by soldier committees.
Initially armed with equipment abandoned by the retreating German and Austro Hungarian armies, the Black Army won victories against German, Austrian and Ukrainian Nationalist forces and predominantly Czech units of the White Army.
In the areas that they liberated the Makhnovists abolished capitalism and the state, helping to organize village assemblies and councils. Land and factories were expropriated and put under peasant and worker control by means of self-governing committees.
Captured officers were summarily executed but the proletarian rank and file soldiers were at liberty to either return home or join the Makhnovchina. 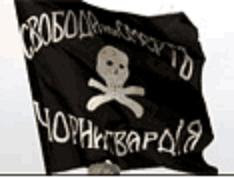 An independent Ukraine, regardless of political colour, was not on the agenda of the Bolsheviks, who determined to crush both the Makhnovists and the Ukrainian nationalist movement.
In August 1921 the Red Army of the Southern Front, under the command of Mikhail Frunze, finally defeated Makhno, who spent the rest of his life in exile.
The message on these banners is (approximately)- death to landowners and enemies of the workers- Liberty or Death.
Posted by Walker