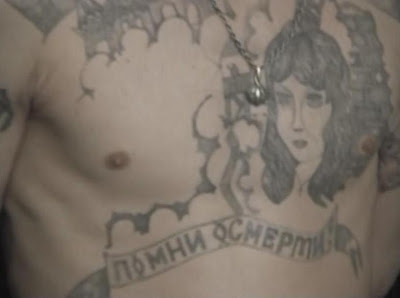 Nobody in my family had tattoos. Well, my great grandfather did, apparently- had them done in The Great War, but he was dead years before I came along. From an early age I was inexplicably fascinated by tattoos. I even dreamed about them- I once dreamed that my left shoulder was encased in ivy- which it now is.
I somehow understood that the significance of the designs went beyond the pictorial 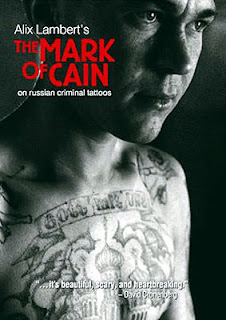 image- sure, the pictures meant something, but the very fact that you had committed to being tattooed meant something as well.
A fair percentage of my body is now tattooed, and I’m something of a student of the sociological/ anthropological significance of tattooing.
Russian criminal tattoos entranced me even before I became a regular visitor to that country.

In The Mark of Cain filmaker Alix Lambert takes us into the gloomy world of the Russian penal system. There are about 800,000 prisoners in the country and the conditions are notoriously harsh. Overcrowding is a particular problem. For example, in the mid nineties Kresty Prison in St Petersburg held 12,500 inmates. It was designed to hold 1150.
We hear from wearers of the old school tattoos which showed where they stood in relation to the complex subculture governed by the Thieves Code , witnesses of the way that the changing political climate has been reflected in prison society, and an inmate tattooist who works with a machine adapted from a Sputnik wind up shaver. 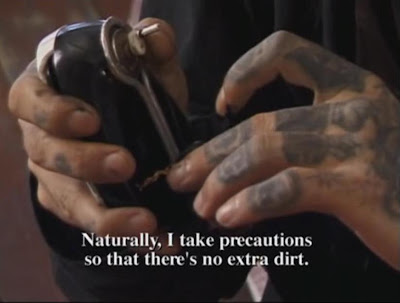