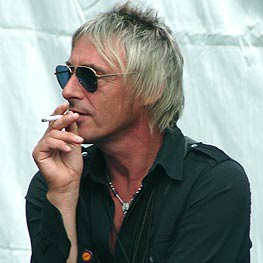 Love him or hate him? Erm...
Am I alone in my feelings about Paul Weller, namely ambivalence? Opinion usually seems to be divided over the man and his work - is he insufferably smug and pretentious, a genuine genius? In fact Weller is picking up this year's NME Godlike Genius Award For Services To Music*...
The Jam were okay- in our school there was an unbridgeable Jam/ punk divide amongst the boys (although I'm sure that we all bought the incomparable Eton Rifles) so I didn't really appreciate the qualities of The Jam until later. That said I viewed Weller as a decent songwriter (his work was and remains highly derivative)rather than as some sort of poet of the dole age. I never really got The Style Council. And the whole 'Modfather' thing of the Britpop era wasn't really Paul's fault. He just happened to influence a generation of formulaic, soulless rock bands (Oasis spring readily to mind). On the other hand I have vague memories of hearing him play an acoustic version of Eton Rifles on some radio show in the mid nineties and it was immense, and Wildwood was , to me , one of the albums of the 1990s.


Tin Soldier- was Paul's overall record choice. He chose Absolute Beginners by Colin MacInnes as his book, and his luxury was a settee to sit on.