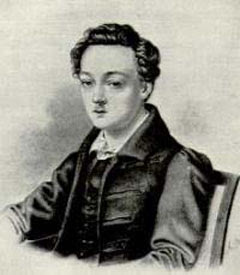 The German writer Karl Georg Büchner (1813-1837) is best remebered as the author of Woyzeck, (made into a film by Werner Herzog with Klaus Kinski in the title role). It is the belief of some scholars of German literature that had he lived longer his reputation would have matched that of Goethe and Schiller.
During his brief career Büchner also gave us an inspirational phrase that lives on to this day- Peace to the cottages, war on the palaces!
In 1834, fresh from his study of the French Revolution of 1789 Büchner, along with political agitator Pastor Friedrich Ludwig Weidig, published Der hessische Landbote (The Hessian Courier) , a proto- socialist pamphlet that urged revolution, calling for the people to overthrow the ruling classes in order to secure the freedom which was their right. Der hessische Landbote has since come to be considered one of the most brilliant political works in the German language. 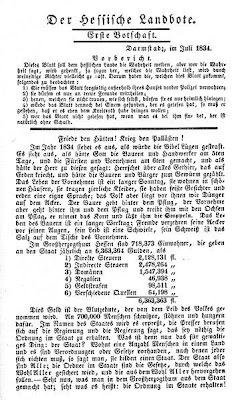 As you can see, it opens with the phrase: Friede den Hütten! Krieg den Palästen! (Peace to the cottages, war on the palaces!). Incensed by the inflammatory content The Hessian Government charged Weidig and Büchner with treason. Following arrest and torture Weidig died in custody. Büchner fled to Zurich, remaining in exile for the rest of his life (he died of typhus at the age of 23). There is a German transcription of Der hessische Landbote here.

The slogan has reappeared down the years.
Here are just a few examples:
In April 1886 the American anarchist magazine The Alarm proclaimed: War to the palaces, peace to the cottage, and death to luxurious idleness! Within weeks Albert and Lucy Parsons were leading a parade of 80,000 strikers through Chicago- the beginning of The May Strikes which saw over half a million Americans striking in support of the 8 hour working day.
In the lead up to The Great October Revolution of 1917 Мир хижинам, война дворцам! was also a favourite slogan of Lenin. In his February 1916 piece in Sotsial-Demokrat entitled
Peace Without Annexations and the Independence of Poland as Slogans of the Day in Russia: it is recycled as: peace to the cottages, war on the palaces; peace to the proletariat and the toiling masses, war on the bourgeoisie!
The slogan also put in an appearance in Huliaipole during the heyday of Makhno, appearing on one of the black banners that flew over his headquarters, and Мир хижинам, война дворцам! is also the title of a 1970 Russian made movie regarding the Civil War Era in Ukraine.

Peace to the cottages, war on the palaces is also a masthead motto of the remarkable Anderson Valley Advertiser , a Californian community newspaper which features libertarian opinions alongside local news reports.
Posted by Walker