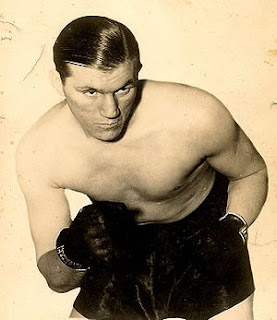 In the 94 years that separated the reigns of Bob Fitzsimmons and Lennox Lewis no one came closer to bringing the World Heavyweight Championship to Britain than Tommy Farr.
On August 30th 1937 at New York's Yankee stadium Farr took Joe Louis the distance but lost on points.
It was an unpopular decision, roundly booed by the crowd of 50,000 at the stadium, and still hotly disputed seventy years on.
One  wet Saturday night shortly after Mr Farr died I was watching a re run of the fight on a TV through the window of a chip shop .  An old man in a colourless raincoat and flat cap, doubtless one of the thousands of my countrymen who had listened to the fight on the 'wireless' nearly half a century before, paused to  give the screen a cursory glance, and hurrying on, to save me the bother of having to watch, said, still smarting from disappointment,  'he loses, you know...'
Posted by Walker