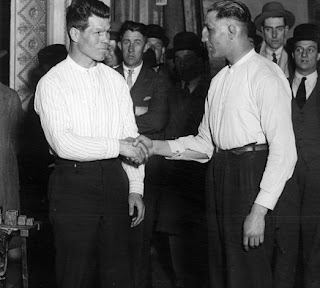 (William Daniel)
(1903-1967)
Llanelli
Light Heavyweight
Total fights 141 Won 86 (33) Losses 43 Draws 12
When Billy Daniels allowed himself to be promoted in the USA as 'Gipsy' he aroused the disapproval of his father (a former Welsh rugby international) , who felt that the family reputation was being tarnished.
Daniel, who briefly held the British and Empire Light- heavyweight title in 1927, did not achieve the heights that the other boxers in this selection did, but his record does include one remarkable victory. In February 1928 he achieved a first round ko of Max Schmeling in Frankfurt.
Posted by Walker