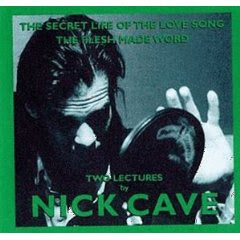 Nick Cave writes a mean love song, and in the first lecture here, read at the Vienna Poetry Festival 0n September 25th, 1999 , we have his thoughts on the genre.

Considering the dark and murderous world in which Nick Cave conjures many of his songs (right from the ealiest days of The Birthday Party) it's unsurprising to find that his literary interests lie in the sacred texts of the Jewish and Christian traditions, in which slaughter and torments abound.
In The Flesh Made Word, a radio essay made for the BBC in July 1996, Nick discusses his relationship with Christianity.

Note: Speaking to the Guardian in 2009, he said: Do I personally believe in a personal God? No.
Posted by Walker