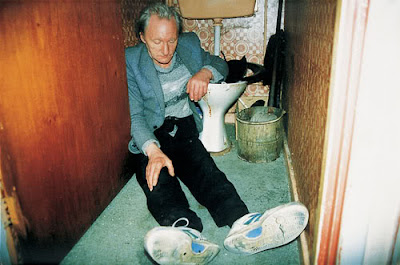 Life is a tragedy when seen in close-up, but a comedy in long-shot. Charles Chaplin.


I mentioned Richard Billingham's 2000 book Ray's A Laugh in one of our occasional Read a Book posts back in the spring.
The title is borrowed (unwittingly I fancy) from Ray's a Laugh (1949–1961) a domestic comedy radio series starring Ted Ray.

My father Raymond is a chronic alcoholic.
He doesn't like going outside, my mother Elizabeth hardly drinks,
but she does smoke a lot.
She likes pets and things that are decorative.
They married in 1970 and I was born soon after.
My younger brother Jason was taken into care when he was 11,
but now he is back with Ray and Liz again.
Recently he became a father.
Ray says Jason is unruly. Jason says Ray’s a laugh but doesn’t want to be like him.
Dad was some kind of mechanic, but he's always been an
alcoholic. it has just got worse over the years.
He gets drunk on cheap cider at the off licence.
He drinks a lot at nights now and gets up late.
Originally, our family lived in a terraced house,
but they blew all the redundancy money and, in desperation,
sold the house. then we moved to the council tower block,
where Ray just sits in and drinks.
That's the thing about my dad, there's no subject he's interested
in, except drink.

It's not my intention to shock, to offend, sensationalise,
be political or whatever, only to make work that is as spiritually
meaningful as I can make it -
in all these photographs I never bothered with things like
the negatives. some of them got marked and scratched.
I just used the cheapest film and took them to be processed
at the cheapest place. I was just trying to make order out of chaos.