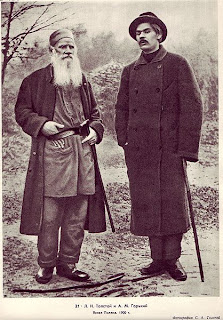 Count Lev Nikolayevich Tolstoy (1828-1910 pictured here with Maxim Gorky) was noted for the vastness of his opus and his beard, but I only recently became aware of his anarchist tendencies.
Prince Peter Kropotkin wrote of Tolstoy in the article on anarchism in the 1911 Encyclopædia Britannica:
Without naming himself an anarchist, Leo Tolstoy, like his predecessors in the popular religious movements of the fifteenth and sixteenth centuries, Chojecki, Denk and many others, took the anarchist position as regards the Sovereign state and property rights...With all the might of his talent he made (especially in The Kingdom of God is Within You) a powerful criticism of the church, the state and law altogether, and especially of the present property laws. He describes the state as the domination of the wicked ones, supported by brutal force. Robbers, he says, are far less dangerous than a well-organized government. He makes a searching criticism of the prejudices which are current now concerning the benefits conferred upon men by the church, the state and the existing distribution of property…

As early as 1857 Tolstoy asserted: The truth is that the State is a conspiracy designed not only to exploit, but above all to corrupt its citizens ... Henceforth, I shall never serve any government anywhere.

Tolstoy's views were influenced by a visit in March 1861 to French anarchist Pierre-Joseph Proudhon, then living in exile under an assumed name in Brussels, and Tolstoy ‘borrowed’ the title of his most famous work, (Война и мир-War and Peace pub.1863-69 various forms) from an earlier work by Proudhon (La Guerre et la Paix-pub.1861).
Almost half a century later, Tolstoy’s association with anarchist thinkers remained strong. He took risks to circulate the prohibited publications of anarchists in Russia, and corrected the proofs of Kropotkin's Words of a Rebel, illegally published in St Petersburg in 1906.
Here are some other gems of wisdom from the Count…

The essence of all slavery consists in taking the product of another's labour by force. It is immaterial whether this force be founded upon ownership of the slave or ownership of the money that he must get to live.

Man must not check reason by tradition, but contra wise, must check tradition by reason.

The earth is the general and equal possession of all humanity and therefore cannot be the property of individuals.

Government is an association of men who do violence to the rest of us.

All governments are in equal measure good and evil. The best ideal is anarchy.

Governments need armies to protect them against their enslaved and oppressed subjects.

The Anarchists are right in everything; in the negation of the existing order, and in the assertion that, without Authority, there could not be worse violence than that of Authority under existing conditions.


Hats off to Highlander at Cactus Mouth Informer for this excellent book recommendation, which in turn led me to some of the material for this post.
Posted by Walker