This is what you get when you mess with us... 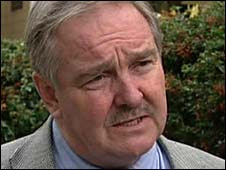 Here is Professor David Nutt (MRCP MRCPsych FRCPsych FMedSci)- if you Google Prof. Nutt you cannot help but come to the conclusion that he knows an awful lot about drugs. He's head of the Psychopharmacology Unit at the University of Bristol, holds a position at Imperial College London and is President of the European College of Neuropsychopharmacology.
He was head of the Advisory Council on the Misuse of Drugs. Was. Until he expressed his views on the relative risks attached to the use of certain drugs. Something he 'd be an expert on.
Unfortunately for Prof. Nutt his views did not suit the agenda of Home Secretary Alan Johnson, so he was fired.
To quote the BBC:
Prof Nutt said he was not prepared to "mislead" the public about the effects of drugs in order to convey a moral "message" on the government's behalf.
I'm not advocating the use of any drug. This is not a comment on the classification of drugs in the UK. It is a comment on New Labour's manipulation of truth, evidence, opinion. The way in which they attempt to impose their will and prevent people from making judgements based on balanced evidence.
So the government's message? It's bad because we tell you it's bad. And here's a clever doctor to back up what we say. And if he doesn't we'll send him away and find one who jolly well does.
Here's the story: http://news.bbc.co.uk/1/hi/uk/8334774.stm
Posted by Walker