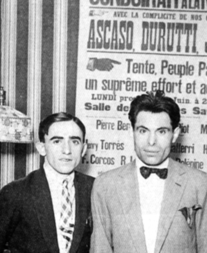 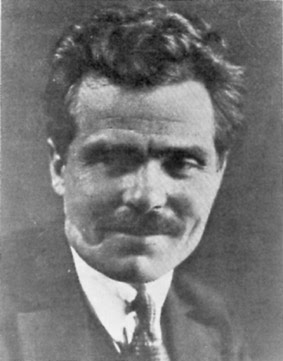 Paris, July 21st 1927- the Anarchist International Defence Committee gave a banquet to celebrate the release of the Spanish comrades Ascaso, Durruti and Jover. They had been imprisoned for plotting to assassinate King Alfonso of Spain . Whilst they were in custody both Argentina and Spain had applied for their extradition. If extradited they would face the death penalty. A sustained effort by the Anarchist International Defence Committee succeeded in frustrating the extradition attempts.
Following the beano a meeting was arranged- Ascaso and Durruti went back to Makhno's. A Russian interpreter was present (like many eastern Ukrainians Makhno's first language was Russian rather than Ukrainian).
The three men had a lot in common- they were all under 40, exiles, fugitives, anarchists, workers (in fact Makhno and Durruti had both worked in the Renault factory) .
At 38 Makhno's halcyon days were behind him- sentenced to death at the age of 17 for his revolutionary activities, by the age of 28 he had served ten years in Russian gaols - in 1918 he met Lenin in the Kremlin; between 1918 and 1921 he had led the Revolutionary Insurrectionary Army of Ukraine to successes against the German/ Austro- Hungarians, the Whites and The Red Army before eventually being driven from his homeland . Now in exile in Paris, his life was a struggle. He had suffered many serious injuries during the conflicts in Ukraine (one of his ankles was shattered by a dum dum bullet) and had suffered the effects of typhus and tuberculosis.

Buenaventura Durruti was one week past his 31st birthday. He had been at odds with the authorities since his teens, and had first gone into exile in France in 1917. Returning to Spain in 1919, he joined the CNT. Durruti gained a reputation as a man of action, involved in many acts of expropriation. in Gijón, in September 1923, he and his comrades carried out what was at the time the most lucrative bank raid in Spanish history. Following a coup detat Durruti and his comrades organized attacks on the military barracks in Barcelona and on the border stations with France. These attacks achieved little and cost the lives of a number of comrades. Following these setbacks, Durruti and his companions (including Ascaso) once again went into exile, this time to Argentina (later travelling to Cuba and other South American countries- they carried out the first bank robbery in Chile’s history). The proceeds of these expropriations funded anarchist and union movements in Europe and the Americas. When Durruti returned to Europe he worked in a Renault factory in Paris.
In 1924 King Alfonso XIII of Spain visited Paris. Ascaso and Durruti plotted an assassination attempt. They were arrested and gaoled for a year, along with a third comrade, Jover.

When they met Durruti acknowledged the manner in which Makhno's activities had inspired him, and Makhno reciprocated by making positive observations about the likelihood of an anarchist revolution succeeding in Spain, for which he saw several encouraging factors.
Makhno is recorded as saying:
Anarchism is neither sectarian nor dogmatic.It is theory in action. it doesn't have a pre-determined worldview.It is a fact that anarchism is manifest historically in all of mans' attitudes, individually or collectively. Its a force in the march of history itself: the force that pushes it forward.
...Makhno has never refused a fight. If I am still alive when your revolution begins, i'll be one fighter amongst many.
Durruti's 'revolution'- Anarchist Catalonia- came nine years later, but by then Makhno had died (on July 6th, 1934, at the age of 46) of the tuberculosis which had troubled him since his youth in prison.
Some veterans of the Revolutionary Insurrectionary Army of Ukraine did actually fight alongside the Durruti Column.
Ascosa was killed in Barcelona on the first day of hostilities in the Civil War, July 20th, 1936. He was 35.
Durruti was killed in action (possibly accidentally shot by a companion) in November 1936.

Accounts of these interesting lives are often contradictory.
The following books are well worth a look :