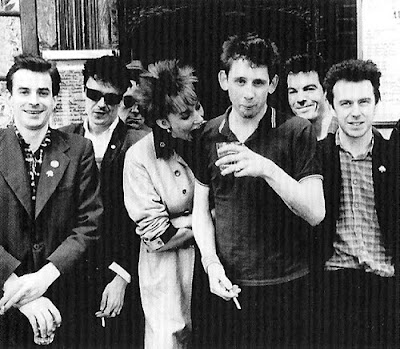 As a recovering alcoholic I approach The Pogues with the same trepidation as I would approach a yard of vodka contest. Back in the eighties their music provided the soundtrack for seamless days of manic drinking.
Finally plucking up the courage to listen to them again after five years has been quite a revelation- even if you're sober there's an uplifting joie de vivre in the music. I can enjoy this without putting on my coat and shuffling to the pub at half ten in the morning.
Shane MacGowan - vocals, guitar
Jem Finer - banjo, vocals, guitar on The Auld Triangle
Andrew Ranken - drums, backing vocals
Spider Stacy - whistle
James Fearnley - accordion
Cait O'Riordan -bass

Just a note: If you've ever downbloaded The Pogues Peel Sessions before, from blogs or torrents, it's almost a certainty that The Auld Triangle cuts out after 49 seconds? (Apparently some bloggers cobble things together without even listening to them...) well my friends, Burning Aquarium isn't like that...
Posted by Walker