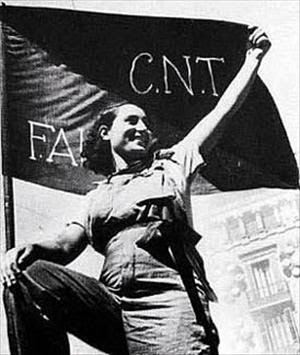 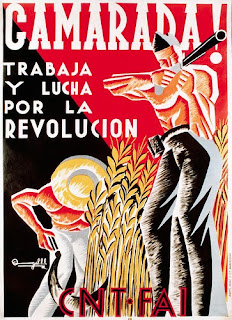 ...the various agrarian and industrial collectives immediately instituted economic equality in accordance with the essential principle of communism, 'From each according to his ability and to each according to his needs.' They coordinated their efforts through free association in whole regions, created new wealth, increased production (especially in agriculture), built more schools, and bettered public services. They instituted not bourgeois formal democracy but genuine grass roots functional libertarian democracy, where each individual participated directly in the revolutionary reorganization of social life. They replaced the war between men, 'survival of the fittest,' by the universal practice of mutual aid, and replaced rivalry by the principle of solidarity...
This experience, in which about eight million people directly or indirectly participated, opened a new way of life to those who sought an alternative to anti-social capitalism on the one hand, and totalitarian state bogus socialism on the other. - Gaston Leval.

Confederación Nacional del Trabajo (CNT-National Confederation of Labour) was founded in Barcelona at the 1910 congress of the Catalonian trade union Solidaridad Obrera (Workers' Solidarity).
In 1927 members who thought that CNT had become a mediating link between labour and capital, rather than a representative of the working class founded Federación Anarquista Ibérica (FAI-Iberian Anarchist Federation).
In 1936, as the main anarchist movement, CNT-FAI drew criticism for collaborating with the Spanish Republican government. Some observers were more sympathetic:
With Franco at the gate of Madrid, I could hardly blame the CNT-FAI for choosing a lesser evil: participation in government rather than dictatorship, the most deadly evil... Emma Goldman.
Federica Montseny gives us a first hand insight into the dilemma: At that time we only saw the reality of the situation created for us: the communists in the government and ourselves outside, the manifold possibilities, and all our achievements endangered .


During this period Catalonia became a self-proclaimed 'stateless territory' run on libertarian principles, with as much as 75% of the economy in the hands of the workers. Factories were run through worker committees; farms were collectivized and run as libertarian communes. Other commercial establishmnets such as hotels were also collectivized and managed by the workers. In some places, money was eliminated and replaced with vouchers.
The Communists and liberals on the Republican side feared that the successes of the anarchists would compromise the support recieved from the Soviet Union They suppressed the anarchists' revolution in order, as they said, to ensure that the war received maximum resources. Armed conflict between the Communists and anarchists, known as the Barcelona May Days (May 3 - 8, 1937 ), effectively put an end to the true proletarian revolution. With the anarchist power reduced the Republican governmnet was free to pursue a more Stalinist model of rule, ensuring the ongoing patronage of the Soviet Union.