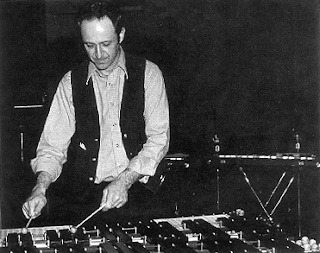 Here's a rare photograph of American composer Steve Reich without a baseball cap. Reich (1936-) was a pioneer of minimalism and massively influential on the development of ambient music.
He employed a technique called phasing (phase shifting), in which tape loops moving in and out of synch produced astonishing distortions of the stark phrase sampled. This is a selection of his early works.

It's Gonna Rain (1965)- a tape recording made in January 1965 at San Francisco's Union Square of an African American preacher, Brother Walter.

Come Out (1966)- Reich wrote this piece to be performed at a benefit for the retrial of the Harlem Six, (six youths arrested for committing a murder during the 1964 Harlem riots for which only one of the six was responsible). An example of process music, it used the voice of one of the accused, nineteen year old Daniel Hamm. At the beginning of the piece, he says, describing injuries he received at the hands of the police: I had to, like, open the bruise up and let some of the bruise blood come out to show them ...

Melodica (1966)- Melodica and tape- more phase shifting.
Melodica is composed of one tape loop gradually going out of phase with itself, first in two voices and then in four. The original loop is of myself playing the four note pattern on the melodica, a toy instrument. I dreamed the melodic pattern, woke up on May 22nd, 1966, and realized the piece with the melodica and tape loops in one day... and the last tape piece I ever made. Steve Reich

Piano Phase (1967) A piece for two pianos, Reich's first attempt at applying the phasing technique that he had previously used in the tape pieces to live performance.
Clapping Music(1972) A minimalist piece , involving the phasing effect with two performers clapping.

You can read Reich's account of these early works and an explanation of how he developed the technique of phasing here.
Posted by Walker