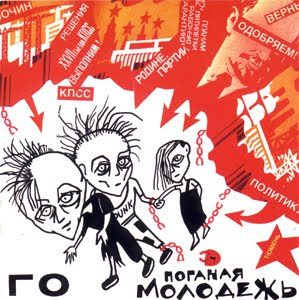 Гражданская Оборона was formed in the Siberian town of Omsk in the early 1980’s. Yegor Letov (1964-2008), the only constant member in their prolific career, was the godfather of Soviet/ Russian punk music (despite getting to look more like one of the Freak Bros. with the passing years).
The band’s name translates as civil defence and was often abbreviated to ГрОб (coffin), or simply ГO.
Early material such as this, their first album, 1985's Поганая Молодёжь (pronounced poganaya molodej and translating as Nasty Youth) was distributed via magnitizdat, an underground network for sharing music that was officially suppressed.
Early in his musical career Letov was committed to a mental hospital, and later allegedly contended with such obstacles as the KGB cutting off the power supply when he appeared on stage. Western suburban punks could only dream of such things!
The sound here is rough street punk (there’s even a few oi oi ois), with the occasional hints at Russian folk influences (those mournful minor keys). Quality wise it sounds like one of those demo tapes you might have made with your mates in the early eighties, which is essentially what it is. 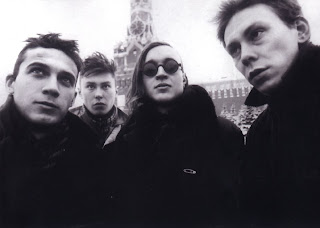