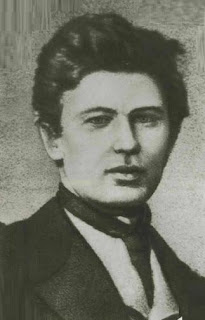 In connection with the extreme maximalist tendencies of the end of the (eighteen) 'sixties the
sinister, grim, and characteristically Russian figure of Nechaev is of particular interest.
He was the founder of the revolutionary society called 'The Axe or the People's Justice'.
Nechaev composed the 'Revolutionary Catechism', a document of unusual interest,
unique of its kind. In this document is to be found the extreme expression of the
principles of atheistic revolutionary asceticism. They are the rules by which the genuine revolutionary should be guided, his manual, as it were, of the spiritual life. Nechaev's catechism is reminiscent to
a grim degree of Orthodox asceticism turned inside out and mixed with Jesuitism. He was
a sort of Isaac the Syrian and Ignatius Loyola of revolutionary socialism, the extremist
form of the revolutionary ascetic denial of the world. Nechaev was, of course, absolutely
sincere, and his fanaticism was of the extremest kind. His was the psychology of the
sectarian. He was prepared to burn his neighbour, but he was ready at any moment to be
burned himself. Nechaev alarmed everybody. Revolutionaries and socialists of all shades
rejected him and found that he was compromising the work of revolution and socialism.
Even Bakunin repudiated Nechaev.
from: Nicolas Berdayev -The Origin Of Russian Communism (1937)
Here  are some links to The Catechism of a Revolutionary, written by Nechaev in 1869:
http://pages.uoregon.edu/kimball/Nqv.catechism.thm.htm
http://www.spunk.org/library/places/russia/sp000116.txt
http://for-freedom.ucoz.com/blog/s_g_nechaev_katekhizis_revoljucionera/2010-05-21-2
Thanks to the original posters.
In Your Generation (1977) Generation X pay homage to the consequentialism that was the backbone of Nechaev's nihilist philosophy:
Posted by Walker